The (Used to Be) Great State Fair of Oklahoma

View from the Space Tower in 2006, at the time I didn’t realize how much of this history would be gone.  You can see the Grandstand in blue on the left, the old Travel and Transportation Building and Clock Tower in the middle, and the B-52 on the right.

Every fall in Oklahoma means that not only has football season started but that it will be fair time in Oklahoma City.  I used to love going to the fair, it was like going to a special playground once a year with lights and food.  As I got older I loved going to see those old landmarks that brought back great memories, riding the monorail and the space needle.  Now almost everything is gone; the monorail, the grandstands, several buildings, the waterfall in the flower building, and even though it’s still there, the space tower sits empty and broken.

Let’s start at the beginning, the first “fair” in Oklahoma City was in 1889 a few months after the land run.  A small group of residents, with the names of Charles Jones, Ed Overholser, H. G. Trosper, and D. F. Stiles, organized the first Oklahoma Territorial Fair.  They bought some land on the northeast corner of Santa Fe and Reno Avenues, then built some buildings, such as a racetrack.  This fair was successful for a few years until the economy started to fail and the population dropped, so it was discontinued in 1894.

Every once in a while for the next few years there would be various street fairs but nothing like an official fair with a designated time and location.  This changed in January of 1907 when Jones along with Charles Colcord organized a state fair association.  A new location was chosen for the fairgrounds at the southeast corner of Eastern Avenue and NE 10th Street.  The first fair was held on October 5th of 1907, just a month before statehood.  There were of course the usual farming and agriculture exhibits, carnival attractions, but the biggest draw was the horse racing on a half-mile track.  Even though the racing stopped in 1913 when the state legislature banned it, there was still plenty to do such as watch car races, ride hot air balloons, or enjoy an air show.  Of course there were lean times during the great depression but the fair still went on.  There was talk of moving the fairgrounds, the location was too small, not enough parking, and at times problems with flooding. 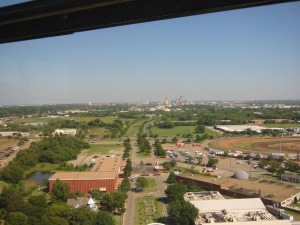 Another view from the Space Tower in 2006, on the left near the bottom of the pic is the old Goodholm Mansion and behind that the Flowers and Garden Building.

These issues were finally addressed in 1951 when the city acquired land between Reno Avenue and NW 10th Street west of May Avenue, which had been the old Sandlot Baseball Park.  The new location hosted its first fair on September 25, 1954.  This is when the grandstands were built with an oval racing track and just south, a drag strip which hosted the National Championship Drag Races in 1957-1958.   Many other buildings were built around this same time such as the 4-H and FFA buildings, the Made in Oklahoma Building, Women’s and General Exhibits Building (now known as Modern Living and Creative Arts Building), Appliance Building (now known as the Kitchen’s of America or Centennial Building), and some of the agriculture barns.  In 1964 the monorail makes its first trip around the fairgrounds and a year later the State Fair Arena (also known now as Jim Norick Arena or “the big house”).  1968 is the first trip into the air on the Arrows to Atoms Space Tower with the Travel and Transportation building to follow the next year after being built around Santa Fe engine #643.    In 1977 the Clock Tower is built from an old oil derrick, in 1978, the Flowers and Gardens Building opens with its waterfall over the doors.  The Goodholm Mansion is moved to the grounds in 1979 after being saved from the wrecking ball.  In 1984 is when we got the big “balloon top” building called the International Trade Center, leaving us all to go in through doors that helped regulate the pressure inside and make our ears pop.

Santa Fe steam engine #643 sitting in the courtyard of the Travel and Transportation Building in 2004.  It was built in 1879, given to Oklahoma City and placed at the fairgrounds in the 1950’s.  It is currently being cleaned by volunteers at the Oklahoma Railway Museum.

So many of these landmarks are now gone- the B-52 is gone, the big slide is as well, the log plaza has disappeared.  Some have been saved and moved, the planes are all over the country, the Goodholm Mansion is out near Choctaw, and just this summer the Oklahoma Railway Museum got the old steam train.  Even the cow barns smell fresh instead of like cow poo mixed with hay.  You can still get a good corn dog or cotton candy, but so many of the foods have just gotten wilder just to see what you can deep fry next.  So I still pay to go to the fair, it’s just not a fun as it once was, back when it really was a Great State Fair. 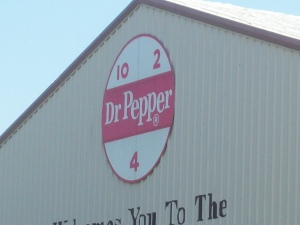 Even this cool old Dr Pepper sign on the back of the Made in Oklahoma Building is gone, 2011.