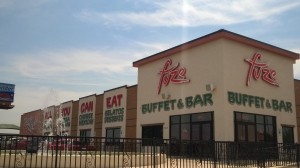 UPDATE:  Closed as of November 1, 2017, then reopened under a new name- Feast in 2018.  I haven’t been to the new concept and really have no desire to waste my time or money there.  So I can’t tell you if it’s any good or not.

For our Food Friday restaurant we have Fuze Buffet and Bar.  It’s the new buffet that opened on the Northwest Expressway in May of 2015.  It’s easy enough to find, bright lights, colorful signs, and dancing waters which turn colors at night.

First few times we tried going, couldn’t find a place to park.  The building is huge inside and could hold lots of people, but the parking lot is small.  Some people were resorting to parking at the sleazy motel right next door.  Might be an idea for the owners of Fuze to buy that motel, bulldoze it and put in more parking.  It would solve so many problems.

So it took a few weeks for us to finally visit and the first visit with my whole family went well.  It was a dinner visit.  The night we were there they had live music and the atmosphere just seemed very relaxed.  To the food, the salad bar is huge- I could have filled up on that alone.  They had so many different options to put on a salad that you could cover the whole plate and never see the lettuce.  They also have a cheese bar with a few different selections of cheeses that you don’t normally see in a buffet.  Also had a sushi bar but my problem is, I’m picky about my sushi and want to know what’s in each roll.  There was nothing that said the ingredients, only the name of the roll, so take your chances unless you know your sushi.  But the main attraction is the entrée buffet itself.  You can get just about any type of meat and sides that you care to have.  Burgers, steak, chicken, pork all cooked in different styles from chinese to italian to mexican to american.  The sides were also a good mix as well, from your standard macaroni and cheese to fried green beans.  Desert buffet was packed and fresh as well with choices of cake, pie, and ice cream.  Service was good, I had no complaints that night.

My second visit wasn’t as great, it was just me and Mae for lunch.  The atmosphere was different as was the food quality.  Nothing seemed to be as fresh.  The salad bar was still great but everything else seemed off.  The flavor wasn’t as good with the meats or the sides.  And the desert was dried out and stale.

Now for a bit of history about the location- back in 1983 this building originally held a buffet called Duff’s Famous Smorgasbord.  I can remember going there, it was cool because it had a food carousel buffet.  It was always a little weird trying to get your food off this moving carousel, but I remember the food was good. (And yes there was also a Duff’s on the south side off I-240 as well.)   After Duff’s closed in 1984, the building sat empty until General Mills Restaurants (later Darden Restaurants) bought it and turned it into an Olive Garden in 1987.  The Olive Garden eventually moved to 50 Penn Place and Tan & Tone America took over the place in 2008.  After Tan & Tone failed in 2012 the owners of Fuze bought the building and it is once again a buffet.

So after only two visits it’s been hit and miss.  I will probably go back a few more times to see if it gets any better or if the problem is only during lunch hours.  Right now I’m giving it 3 pieces of bacon hopefully it improves.

Mae with the dancing waters at Fuze, Oklahoma City, 2015.

Mae’s Introduction or Oh No, I Let the Pre-Teen Take Over

The (Used to Be) Great State Fair of Oklahoma