Going Back To My (Second) Home

I call the whole state of Oklahoma my home, mostly because I’ve lived in so many towns- Norman, Oklahoma City, Piedmont, Okemah, Tuttle and Tipton. Ok, I didn’t really live in Tipton but I might as well have. It’s my ancestral home, I have 3 generations buried in the Tipton Cemetery. It’s where I came from. The history of Tipton and of my family are intertwined, when Tipton was having a good spell, so was my family. When the hard times hit my family, they hit those in Tipton as well.

Tipton was founded in 1909 as a stop on the newly built rail line by the Wichita Falls and Northwestern Railway which ran from Frederick, OK to Altus, OK. My family first arrived in this town around 1912. They were farmers and the area was mostly agricultural.  Tipton actually grew quite quickly in time where a town didn’t have much chance of survival but having that rail link helped the newly born town. Buildings went up on Main Street, homes were built with a school soon to follow. The 1920’s were quite good for this little town as well as my family- my Great-Grandfather was a barber and the last of his 5 children, my Grandfather, had just been born. But the good times would soon come to an end.

By the 1930’s there were around 1500 people here. This was during the depression and the height of the dust bowl. It was a tough time, many farmers had lost their crops, then their land, then homes, and then left town. Many businesses in town were closing and people were doing what they could to bring in some money. My Great-Grandfather died suddenly in 1924, leaving My Great-Grandmother, Tennie, a widow bringing up 5 kids alone. She did have some life insurance to fall back on but had to take in laundry and boarders to help make ends meet. My Grandfather, Joe Bob, had to leave school at the age of 10 and went to work in order to help the family. Across the street from the Farley’s lived the Pendergrass family, my Great Grandmother Ella Florence was recently widowed herself after losing her husband, James Erskin, in 1932 to diabetes. She was left with 7 kids, my own Grandmother, Olga, was 10. Grandma told me of having the funeral for her father and that none of the kids had shoes, so the local church stepped up to help. It was the first time my grandmother had new shoes. She also told me how during the dust storms, the dust would be so thick you couldn’t see and that her mother would wet the towels to put them in the door cracks so the dust wouldn’t come in. 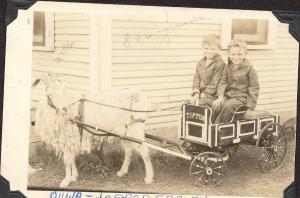 Now Tipton had been hit hard in the 1930’s but it was starting to recover at the start of the war. Many of the residents were leaving, if only temporarily, to join the war effort. It was in this environment that my grandparents met and fell in love. They married in July of 1941, and moved to Oklahoma City to work at the Douglas aircraft plant (now Tinker) in Midwest City. And at the end of the war my Grandparents returned, as did many others, to help Tipton with a population boom. This is really when the town hit its stride. My Grandfather bought a small service station on the southwest corner of Broadway and Davis (right under the water tower). Renamed the Farley Service Station, he became a trusted mechanic to those in town. My Grandparents also started to grow a family, first my uncle Jerry, then my Dad, and if those two weren’t enough, 3 more kids followed. My dad told me many stories about growing up in this small town where everyone knew everyone. He told me about the carnivals that would come to town, about the parades, he said that on Saturdays the stores were so packed and you couldn’t find a parking spot on Main Street. There were so many people and it was a great place to live, even if the summers were still hot. My dad and his older brother were in band together, at the station together, and got in a lot of trouble together. Everyone in town knew the Farley kids and who to talk to when they were caught doing things they shouldn’t be doing.

The town and my family were still prosperous well into the 1960’s. My Grandparents had now added a parts supply store to their business venture, so while Grandpa was at the station you could find Grandma across the street at the store. I came into the picture in the early 1970’s and you have no idea how much I loved going to Tipton. After living in Norman, Tipton was so quiet and still had that small town charm to it. I remember going to the station and having my aunt Janet get me a Dr Pepper out of the coke machine, then we would go to the school for band practice. She was 13 years older than me and my best friend when I was a little girl. I also remember the day my mother rode the 3 wheeled bike from my Grandparents house to the station. It had a basket on the back between the wheels and that’s where I would sit. Well my mother, not being very graceful, tipped the bike over right in the middle of Davis St. I was 3 and fell out of the basket, I wasn’t hurt but it was funny. I can also remember my Grandma’s sisters taking them shopping in the old five and dime store, one of them bought me a cute little pink flower truck. I loved that truck.

My Grandfather finally had to retire in the early 1980’s, his health had gone downhill and none of his kids wanted to take over the business. So the parts store and station got sold off. But my Grandparents stayed there for a time. And that is how life was in Tipton around this time- business were closing because the parents just couldn’t do it anymore and the kids had moved away. Tipton was slowly starting to decline. Even though in 1980 the population was around 1500 it had dropped to around 1000 ten years later. We didn’t go there as much anymore, my Grandparents were now in Oklahoma City for health reasons. My Aunts and Uncles were also in the City. In 1996 my Grandfather lost his battle with lung cancer and that was the first time in years we had all been together in the old house in Tipton. Not long afterward Grandma sold it, another piece of my childhood was gone. By this time someone had torn down the station and walled up the parts store, just wasn’t the same.

I didn’t go back to Tipton for many years, between work and raising a family, just never had the time. But then in 2014, the Farley family had to return to lay my Grandmother to rest. In the Tipton cemetery, right next to my Grandpa and his mother. About 100 feet away from her own parents and a sister. I went alone on this trip, husband had to work and daughter had to go to school. I wanted to return with my father and have him tell me and my daughter the stories of my family in this now very quiet town but I didn’t get a chance. Only 6 months after Grandma was gone, so was he, taken down by pancreatic cancer. Someday his ashes will go back to Tipton. But finally this summer I took Mae to her ancestral home for the first time. The population is down to about 800. They have had some good football teams recently but it’s hard to make a living in a town so small. Farming is still the main business, there are a few stores left downtown but more collapsed buildings than open businesses. No matter what becomes of Tipton, it will always be my second home. Where the good memories are of a time now long gone and where my family still lies under the sandy soil of southwestern Oklahoma.

The corner of Broadway and Davis- to the left the former home of Farley Auto Supply, on the right the remains of Farley’s Service Station (the canopy was not there when my grandfather owned it), Tipton, OK 2014.

A remaining business next door to a collapsing building. Tipton, Ok, 2015.

Well lets try this and see what happens.