Arrow from the Past 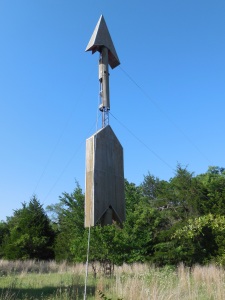 UPDATE:  As of November 9, 2018 the current Space Needle that took the place of this arrow is being torn down.  It was badly damaged after a flood in June 2010.  Some believe that the fairgrounds administration never intended to fix the space needle and wanted to demolish it.  No I’m not happy to see more of Oklahoma’s history being destroyed.  Hopefully something will be saved from the space needle.

I spend a lot of time driving the back roads of Oklahoma and while out in the country southwest of Yukon, I found something that really intrigued me- a big arrow.  Just sitting in this field, rusting away.  Odd, definitely not something you normally see so I had to learn more about this strange sight.  Turns out it is quite important to the history of Oklahoma and the state fair.

In 1957, the state of Oklahoma held its Semi-Centennial Exposition at the new State Fair Park.  The fairgrounds had only recently been moved from its location around NE 10th and Douglas to the home we know now at NW 10th and May.  This celebration, held June 14th- July 7th, was a big deal.  Not only did the fairgrounds stay open 24 hours a day, but well- known performers of the time such as Patti Page and Mickey Rooney made appearances.  The Today show from NBC hosted by Dave Garroway broadcast live so the whole country could see the excitement of the crowds.  As a center piece to this great celebration was the Arrows to Atoms tower.  A 200 foot tall red and white arrow with an atom just below the tip, I have been told that you could see it for miles even at night when the point was illuminated from inside making a red glow.  This tower had been dedicated at few months before on April 22, 1957 and represented the progress Oklahoma had made in 50 years.

This tower stayed in the middle of the fairgrounds until 1967 when it was deemed structurally unsound and was removed.  It was replaced the next year by the landmark we all know now as the Space Needle.  What many do not know is that after removal, the arrow was cut down to about 80 feet and placed on land owned by an employee of the Utility Tower Company (who had originally built it) near SW 59th and Frisco Roads.  Even though the property (called Odd Acres by some locals) has changed hands a few times, that arrow still sits on the side of the road.  It’s no longer red and white and the atom is long gone (even though I’ve heard the rumor that it was placed on top of the current space needle, I can’t confirm this), it provides a great nesting place for birds.  Just a piece of Oklahoma history, sitting in plain sight and unfortunately rotting away.

Originally red, the arrowhead is 15 feet tall and lit from the inside.

The tail section was 26 feet tall.  You can still just make out the red on the outside panels with white down the middle.

Comments Off on Arrow from the Past